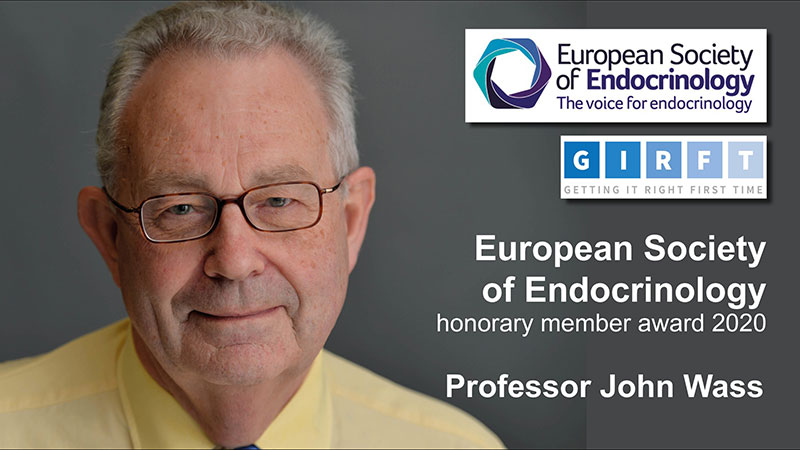 Professor John Wass, the clinician leading the Getting It Right First Time (GIRFT) programme’s endocrinology workstream, has won a prestigious award from the European Society for Endocrinology, honouring his contribution to the specialty.

The award was presented to recognise his hard work and contribution to endocrine science over a career spanning more than 45 years.

Professor Wass was appointed as the GIRFT clinical lead for the endocrinology workstream in 2017 with the endorsement of the Society for Endocrinology, and is due to publish the specialty’s national report later this year.

He is the Professor of Endocrinology at Oxford University and was head of the department of endocrinology at the Oxford Centre for Diabetes, Endocrinology and Metabolism, Churchill Hospital, Oxford, until 2012. His research interests include all pituitary tumours, especially acromegaly, adrenal disease, angiogenesis in endocrinology, and the genetics of osteoporosis and thyroid disease.

Since 1975 he has published more than 350 articles in scientific journals and as well writing many reviews and chapters in textbooks, including the Oxford Textbook of Medicine and DeGroot’s Textbook of Endocrinology.

In 2015 he was awarded the Distinguished Physician of the Year Award by the American Endocrine Society – the first non-American to ever receive the award – and in 2017 he received the Lifetime Achievement Award from the Pituitary Society in the USA.

Accepting the ESE honorary member award, Professor Wass said: “A few years ago, when I was president of the European Federation of Endocrinologists, we had the idea of eventually making a society for endocrinology throughout the whole of Europe.

“I obviously deeply believe in endocrinology as a subject and I also believe in Europe as a conflagration of wonderfully powerful nations, working much better together, in the field of endocrinology, politically as well as academically… so it gives me great pleasure to accept the honour of being an honorary member of the European Society for Endocrinology.”

You can watch a video of Professor Wass’ ECE acceptance speech here.